Gluten-Free and Surviving in the Pasta Capital of the World

For some people, food is simply fuel—it’s just a means to keep your body going. However, food can do more than its main job of keeping you alive. Food brings people together. You never see a social gathering that doesn't involve food, and if you’re not there for the socializing, chances are you just came for the food. If food weren’t more than just a way to sustain your body, people wouldn’t post entire videos of themselves eating large amounts of food on YouTube. People wouldn't eat based on how they feel, and for sure, food wouldn't be a way for people to pass down traditions to future generations. Because of the limitations of being gluten-free, I have a unique outlook on food’s many purposes.

Food fiend that I am, imagine how excited I was to try new authentic cuisines when the High School took a trip to Greece and Italy last December. However, I was worried that because I’m gluten-free I would not get the full Greek and Italian eating experience. (How could you visit Italy and avoid wheat?) To my surprise, I quickly discovered how easy it was to find amazing gluten-free Greek and Italian food, and I‘m telling you, the whole time my taste buds were dancing. After months of anticipation, I ended up having more amazing dining experiences in the eleven days I was in Europe than in my entire life (Sorry mom!).  Each meal was something to look forward to, even mornings when we visited the coffee shops located conveniently close to our apartments.

When we arrived in Greece, the first night we ate at this small restaurant called Adezandrina. It almost felt like we were in a themed restaurant in Houston. It didn't feel real until the food arrived and I tasted the first bite. It was then clear we weren't in Texas anymore. As seen below, we had ordered a big plate to share of souvlaki, an assortment of meats and grilled vegetables. Completely gluten-free, It really set the bar high.

Although we ate many wonderful things while in Greece, nothing compared to the special surprise that one of our classmates, Ruth, got for her birthday—a full authentic three-course (although it felt like nine-course) Greek meal cooked by Michail Starnatellis, a chef who prepares meals and entertains in his own house. Our host was so nice and inviting that he reminded me that hospitality was very important to the Greeks as we saw earlier in the semester reading the Odyssey. In this special dinner, we had been able to taste authentic dishes that we would have missed out on, such as spanakopita (spinach pie) and graviera (fried cheese.) The crowning jewel was, patsitsada, a dish that included a type of flat pasta with roasted rooster. It was a weird to think of eating rooster, but it turned out it was better than regular chicken. With a traditional Greek birthday cake to finish off the meal, we felt like suitors from the Odyssey, stuffed from the elegant feast that had been prepared for us.

Now in Italy, the food was just as amazing, but what made it all the more fantastic was the gelato we ate almost every day. It was fantastic. It was the craziest thing—everytime we found a recommended gelateria it happened to be better than the last one, so it was only fitting for our last gelato-eating experience at Giolitti to be a slam bam finish. I am not exaggerating when I say, I don’t think I could ever eat ice cream again and not be disappointed it's not gelato from Giolitti. The perfect balance of coffee, chocolate fondant, and nutella gelato was creamy; the sweet flavours were a party in my mouth; and every bite was savoured like it was my last meal. I can still hear the bells ring thinking of when that luscious, fancy ice cream graced my taste buds with its presence--and I owe it all to Bernardo Buontalenti, who in the 14th century, officially developed gelato.

In addition to the many heavenly gelato stops, we ate at this really adorable bakery that was entirely gluten-free. We were even able to find two restaurants where I was able to eat a Margherita pizza, one of the most iconic pizzas in Italy and interestingly named in honour of Margherita Savoy, a queen of Italy. I was also able to enjoy pasta carbonara, an Italian dish from Rome made with egg, hard cheese, guanciale, and pepper.

In Italy we also had the opportunity to get a full-course authentic Italian meal, at Teatro del Sale. You had to become a member of the club in order to eat there, and you had to reserve a table beforehand. It made me feel special. When we walked in, we were met with a lovely rustic aesthetic. Looking past all the wooden tables, there was a fairly large stage where an Italian blues band performed after dinner (spoiler alert, it was quite the performance.) To the left, a great big kitchen was enclosed in glass. Chefs bustled around preparing food by the ton, every once in a while loudly announcing each course in Italian. We all turned to Umberto and Vittoria to translate for us and quickly ran to the table to get first picks like moths to a light. We were served delicious dish after delicious dish. The best thing was, the food was laid out buffet style so you could choose how much you wanted to eat and not feel stuffed after the first course. We had many servings of food, but the ones that were particularly memorable were the most heavenly broccoli cheddar soup, the most savory and perfect assortment of seafood (no surprise seeing that seafood is locally sourced due to Italy's location in the Mediterranean), and the delightful flourless chocolate cake bites served with whipped cream. (Shout out to the Cohens who recommended the place!) With this meal I was able to get a full sense of the flavour profile of Italy’s food and see the difference and similarities between Greece’s food. Both cuisines widely use olive oil, vegetables and herbs, grains and bread, wine, fish, and various meats, but the sauces are completely different. Italians specialize in tomato sauces whereas Greeks prepare more yogurt-based sauces. Cheeses are also very different--Italy has its traditional hard cheeses and Greece has its famous, soft, sheep's milk cheese, feta.

At the end of the trip, I found that the food we had eaten was more than an excuse to take a break from walking. It helped make some of my favorite memories. Upon sitting down to enjoy a meal, we were able to enjoy one another's company in the moment, and we were able to experience an important aspect of those cultures. Finally, It helped bring the past to the present when thinking of the fact that we were eating the same food that people in ancient Italy and Greece were eating. Overall I was so thankful to have the opportunity to take this trip, and I couldn't be more thankful for the multiple gluten-free restaurants that allowed me to eat all the countries’ wonderful cuisines. Food, as we experienced, can be different and do different things for every country, every family, and even every person, but at the end of the day, if it tastes good, eat it! 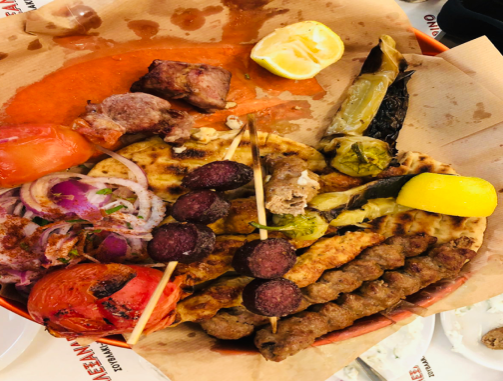 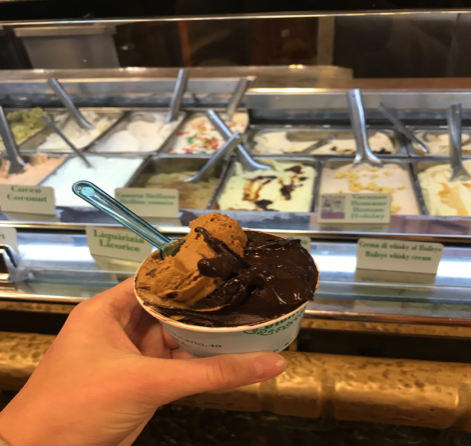