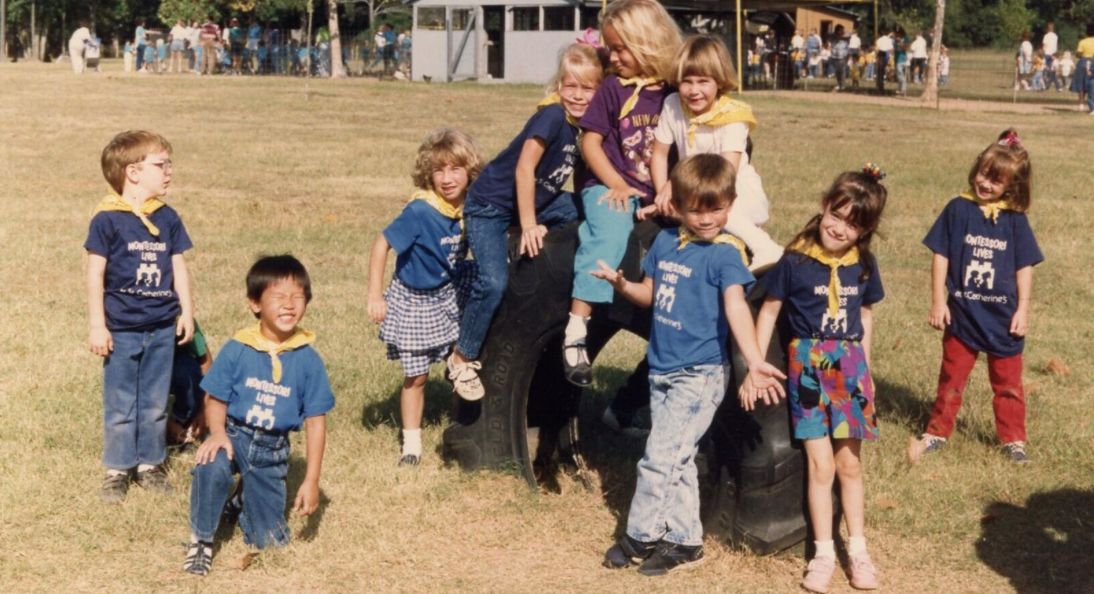 The parents support the school because they have seen our program and like it.  Without the parents, St. Catherine’s Montessori would not be.

I went into the classroom and I saw all these little children, they were all sitting on the floor and they weren't saying a word. I had never seen anything like this. They were all working. I asked my Aunt Mary "What do they do?"  She said, "It's Sister Edna Ann."  I had never seen a whole room children so calm and focused....it was amazing.

In July of 1994 our family moved to Houston for one year. We enrolled our two children, Frances and Chris, at St. Catherine’s Montessori School in Cynthia Blessman’s class. That was a wonderful year. We made many friends among the families at SCM and with the primary teachers, Sr. Shirley, Sr. Edna and Ms. Cynthia. It couldn't have been better. Our children had a great year and we were sad to leave when the year came to a close.

After two years of being away, we were headed back to Houston. To our delight we were going to return to SCM. Little did we know how much the school had grown and when we applied we found out it was full and we put on a waiting list! I sent a letter to Sr. Edna and Sr. Shirley telling them how much we loved the school and had made the decision to move back to Houston in part because of our love for SCM. A few weeks later we received a letter inviting the children to interview with the lower elementary teachers and shortly after our acceptance came. We were back in! Three children this time and a fourth soon to follow. Nothing could have made us happier!

Today, those four children have come and gone through 8th grade. We have one in high school, college, graduate school and one has his own job! Our fifth child, is following in his siblings footsteps…as he finishes up his Lower Elementary years this coming up year and the plan is for him to stay like his siblings! And over the years I have spent time working as an assistant and school nurse.

St. Catherine’s is really our second home. We consider it the village that helped us raise our five children. We owe so much gratitude to all the hard working people at St. Catherine’s. It is with much love and respect, that we look forward to continuing to be part of this wonderful community.

Sr. Edna could teach reading like no one else.  After my son was in her class for one month he was bringing home a large set of words that he could read.  Soon after it was a new book every day that was sent home and to be read for "homework" with a parent.  There was one child in the class whose parents never required their son to read his book at home.  He would return to school with the book unread.

Sr. Edna to the rescue.  Every day during lunch, Sr. Edna would take this child and do what the parents had failed to do....he learned to read despite no support from home.

When I attended Dominican Montessori, they only went to the 3rd grade at the time.  I only attended the school for three years but remember those days rather fondly.

I attended Dominican Montessori between the ages of 2 and 8. The first school I attended was in a large building in downtown Houston that often smelled of shoe polish and had lots of dark corners to explore. :-) When I was older I attended classes at what I recall was the Dominican order campus on Almeda. It was a large estate with a long driveway from the street to the main building and lots of trees.

I was taught by sisters Shirley and Edna Ann, in addition to a number of younger nuns who assisted them. My mother, Hilda Henderson, volunteered for a few years as a room parent. Those were some of the happiest years of my life.

This early education time period at SCM instilled in me curiosity and confidence, and fostered my independence and kindness as a child. I remember Sr. Shirley and the others fondly!

From the first day that my wife Carmen and I arrived to evaluate St Catherine’s as an option for our 4 year old Carolina, I noticed something very special about the school. I did not consciously realize it then, but there was a Spirit that permeated the environment and impacted me deeply. Each encounter with the foundresses, Sister Shirley and Sister Edna, the administrators, teachers, and even the maintenance staff communicated “peace be with you”.

After the visit, I reminisced about my own experience at St Catherine’s as a student when I was in elementary school, and it dawned on me that the spirit of the place and of the Montessori system had helped to unleash an incredible desire within me to learn and grow. If that spirit was there for me, I reasoned that it would be there for my daughter. So Carolina entered St Catherine’s that next school year, and over the years our three other children followed.

Looking back now that our children are grown, I truly believe that the spirit of “peace be with you” is what inspired me, and then two decades later our four children, to grow and reach our potential.  Now our younger nieces and nephews as well as the children of friends are St Catherine’s students, and I can confirm that the Spirit is still there, as it always has been.... in the students, teachers, parents, and friends, in their love for each other.

May the Spirit of Peace that lives in St Catherine’s Montessori be with us today and always.

If you have any stories you would like to share, please click here. We welcome all students, staff members, former staff members, alumni and alumni parents to participate.