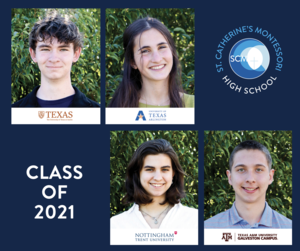 MAY 12, 2021 - The SCM Class of 2021 is college-bound, and their selections reflect their time at St. Catherine’s and the experiences that have helped shape their lives.

Vittoria La Matta will attend The University of Texas at Arlington and plans to transfer to UT Austin after freshman year. At St. Catherine’s, Vittoria learned the “importance of community and independence,” which she had in mind during the college selection process. “I knew that I did not want to go too far away so I mainly looked at schools in Texas. [My top choices] were far enough where I could be independent, but close enough to home where I could go back whenever I wanted to,” says Vittoria. She sees Austin as a city full of opportunities where she could picture herself living, and looks forward to studying abroad.

Jackson Uitenbroek will attend Texas A&M University at Galveston. He considered colleges with Navy ROTC programs that also offered a degree in Marine Engineering Technology. Of his time at St. Catherine’s Jackson says, “The things that will definitely stick with me the longest are the trips – the trip to Greece and Italy in high school, Marine Lab in Key Largo in the AC, and the trip to Washington, DC I took in 7th grade.”

Sarah Lopez will attend Nottingham Trent University in England. Her travel experiences and goal of becoming a set designer for film informed her decision. “It was my very top choice, and not to mention in Europe, so it is safe to say [Nottingham Trent] was a pretty fast and easy decision,” says Sarah. She credits St. Catherine’s for teaching her effective communication, analytical and critical thinking, and a self-motivated work ethic. “The program I am going into relies heavily on having most of these qualities, so I am very thankful to have learned them beforehand.”

Jacob Blackman will attend The University of Texas at Austin. He evaluated colleges based on the strength of their anthropology and conservation programs, and ultimately chose UT Austin for its location and diverse topics within the Department of Anthropology. Jacob says, “St. Catherine’s has given me a strong sense of justice, kindness, and critical thinking that I will carry into college.”