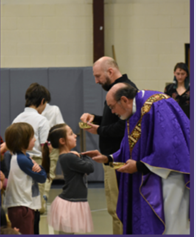 This afternoon we celebrated Mass for Ash Wednesday with the reception of ashes to mark the beginning of the season of Lent in preparation for Easter.

Lent is a period of prayer, fasting, and alms giving rooted in the 40-day fast of Jesus in the wilderness.

Within the community of the baptized, St. Catherine’s students are called to participate in the liturgy by undertaking roles such as altar servers. The altar servers assist the priest in the celebration of the Mass by carrying the processional cross and candles; presenting the wine, bread, and water to the priest; and assisting him in the washing of the hands during the preparation of the gifts. Throughout the year in the Atrium, the students spend time working with the articles and the order of the Mass. On the day of each Mass, as well as once or twice during the week before, they practice with Sr. Herlinda.

Let us say a prayer for all altar servers. For these altar servers that the light of Christ may shine in their hearts. Our Father...Amen.